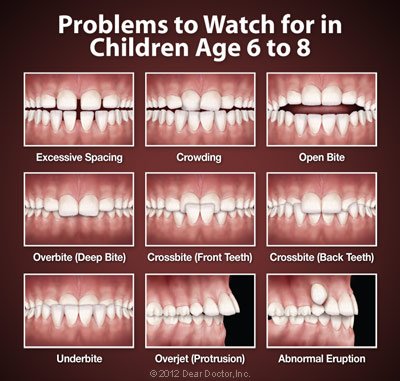 Age 7 is the perfect time for your first orthodontic exam

Age 7 is the perfect time for your first orthodontic exam with Dr. Simister. At this age, usually, the first adult molars have erupted and baby teeth in the front are becoming loose. Although many kids do not need braces at this time, it is an excellent opportunity to evaluate crowding, crossbites, airway problems, excess spacing, habits (thumb/finger sucking, and tongue thrust). By catching dental problems early, it may prevent more expensive, longer, and complex treatment later. Treatment at this age is typically referred to as a Phase 1 treatment.

As a parent, there are several conditions you can watch for concerning your child’s orthodontic needs (see chart above). Some of the most common are listed below:

This condition is very common in young kids and requires early treatment. Usually, a dental appliance called a ‘Palatal Expander’ is used to correct the problem. This treatment is typically completed in 6 – 12 months. At a young age, the palate is soft and can be expanded predictably and painlessly. As adults, this procedure is much more difficult and often requires surgery.

Another condition that may benefit from early treatment is severe crowding. Minor dental crowding is normal in young children and no treatment is recommended. However, severe crowding often needs to be managed and treated. This occurs when the jaws are too small to accommodate all of the permanent teeth. Either palatal expansion or tooth extraction may be recommended at this point to help the adult teeth erupt properly.

Early Treatment: Habits To Watch For

Habits are sometimes difficult to correct at home. If these habits persist beyond age 6-7, schedule an appointment with Dr. Simister for and examination. Persistent thumb sucking or Tongue thrusting can negatively affect the palate, the bite, and the erupting teeth.

Thumb Sucking – The sucking reflex is natural in early childhood; it usually disappears between ages 2 and 4. But if it persists much later, the pressure of the digit on the front teeth and the upper jaw can actually cause the teeth to move apart and the jaws to change shape. This can lead to the orthodontic problem called “open bite,” and may impair speech.

Mouth Breathing – Mouth breathing is an abnormal breathing pattern in which the mouth always remains open, passing air directly to the lungs. It is related to alterations in the muscular function of the tongue and face. It may cause the upper and lower jaw to grow abnormally, which can lead to serious orthodontic problems. Although mouth breathing may start from a physical difficulty, it can become a habitual action that’s hard to break.

Tongue Thrust – Tongue thrust is when the tongue pushes forward against the teeth. This type of action may eventually lead to an open bite. An easy way for parents to identify a tongue thrust in their child is to ask him or her to clench the teeth down and swallow while teeth are clenched. If there is a tongue thrust, the tongue will push through the teeth while swallowing.

Airway problems – Some children have narrow palates and airways. By expanding and opening the airway, some health-related problems can be avoided. 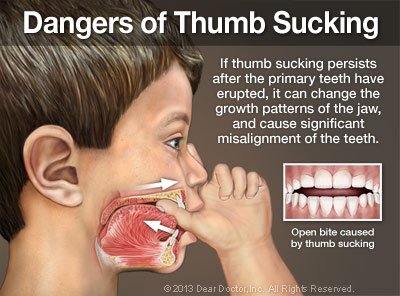 5 Convenient Locations to Better Serve You!